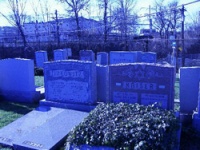 In October 2000, approximately 11 months before 9/11, a retired Israeli Defense Forces(IDF) officer, and veteran of the Yom Kippur War(1973), was collecting English Ivy Cuttings at the Gomel Chesed Cemetery located at McClellan and 245 Mount Olive Avenue, which is near the city lines of Elizabeth and Newark, New Jersey. The Gomel Chesed Cemetery is a Jewish cemetery.

The man overheard a conversation spoken in Hebrew, which drew his attention. He hid behind an 8-foot tall retaining wall and listened in to their conversation as they stood below. Shortly after a Lincoln town car approached the two people and the man in the backseat got out to greet them. After normal niceties were exchanged the third man said:

“The Americans will learn what it is to live with terrorists after the planes hit the twins in September.”

One of the men that had been leaning against the retaining wall expressed concerns that the upcoming presidential election (November 2000) might impact the plans. The man that arrived in the Town Car quelled the doubts by saying:

“Don’t worry, we have people in high places and no matter who gets elected, they will take care of everything.”

The observer who overheard this conversation related it to the FBI on numerous occasions only to be ignored each time. Nothing was done about it, and no investigation into the incident has ever taken place.

obambi.com ---> Talk back, don't let them hold you down... Cancel reply